Dede Johnston's 'The Crowded Slopes Series' to be launched at The London Art Fair 2010... 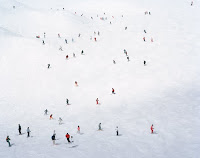 Recently featured in the Sunday Times, Dede Johnston's photographic series has already gained interest from art collectors and skiers alike. We have already sold several pieces from the edition before they are officially released at the LAF 2010 in Islington next year...If you wish to join us we do have a couple of complimentary invitations still available. View 'The Crowded Slopes Series'; http://www.artnet.com/artist/425945482/dede-johnston.htmlPlease note we have also moved to the central mezzanine, stand 40. London Art Fair 2010 13-17 January 2010. Happy New Year!