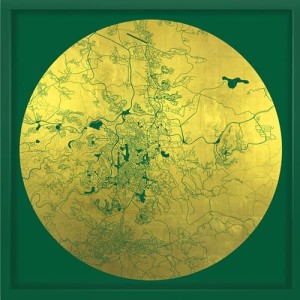 Ewan David Eason has been invited to be part of the group exhibition 'Mapping Inspirations'. For this exhibition Eason has produced one of his Mappa Mundi works using Jerusalem, with the city being green in colour as is in the original Mappa Mundi.  Eason's work will be alongside other established artists including Grayson Perry, CBE, RA, Andrew McLean, Genevieve Belgard and Charlie Calder-Potts.

'Whilst studying artworks that represented my exploration into maps in 2011 I was introduced to Hereford Cathedral’s Mappa Mundi, centred on Jerusalem. I began looking into ways of creating my own Mappa Mundi, centring on a significant place to me; where I proposed to my now wife in London. I was also intrigued by the abstract image created on the Mappa Mundi. In my pastiche I remove any words from the map in order to create an abstract image. I also introduced the use of gold leaf to represent the egalitarian nature of people living in the cities. Since I began I have been commissioned and created over 200 cities.