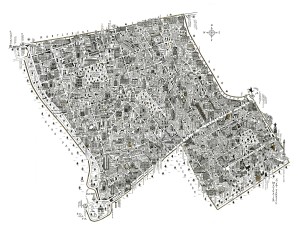 As a special commission from Shapero Modern, Stephen Walter has created a pictorial map of Mayfair & St James's.

"I walked every inch of both Mayfair and St James’s, marking off every road and alleyway in the area. The most striking architectural features that I noticed were the doors, windows and lamps that adorn many of the grand London Town houses."

Historical events are noted, such as the Millennium Hotel on Grosvenor Square, and the infamous poising of Litvenenko in 2006. The map shows the routes of the new Crossrail tunnels and the Victoria and Jubilee Lines as well as the route of King Scholars Pond Sewer that now ghosts the course of the old Tyburn River. 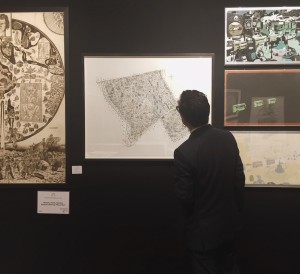 Mayfair & St James's is currently on display at both Shapero Modern from 22nd June - 6th July and at Masterpiece London from 30th June - 6th July.  Please see our exhibitions page for more details.