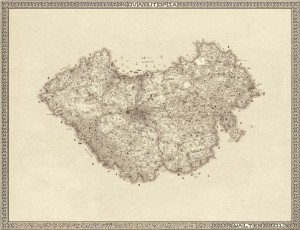 A group exhibition featuring the work of Stephen Walter is currently on show at Danielle Arnaud Contemporary Art. Titled Enclosure, it focuses on 6 contemporary artists and their exploration of ideas around utopian dreams, containment and escape.

Among the artworks on display is Stephen's extraordinary original drawing, Nova Utopia, which is being exhibited in its bespoke hagioscope frame. This map revisits Thomas More's famous fictional state of Utopia a century after it has been transformed by a capitalist revolution.