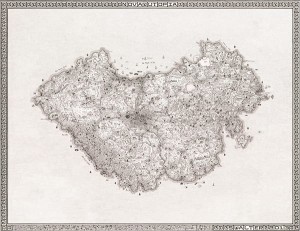 To coincide with the 500th anniversary of Thomas More's famous publication Utopia, Stephen Walter's Nova Utopia is currently on exhibition at Somerset House as part of UTOPIA.  UTOPIA 2016: A Year of Imagination and Possibility celebrates the 500th anniversary of Thomas More’s inspirational text. A year of artists, designers, provocateurs and thinkers experimenting with ways we might live, make, work and play.

Stephen Walter | Nova Utopia, 2013 | Archival digital print with protective and UV glaze | Signed and editioned by the artist | Edition of  50