A Posy for You 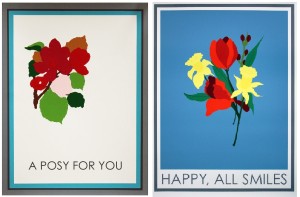 Adam Bridgland has completed a beautiful pair of screenprints which TAG Fine Arts will release at Multiplied 2012 this month. He's been experimenting with floral motifs over the last year to create these fresh takes on a traditional genre. He explained his motivation to us the other week:

"The works are part of an ongoing project that emerged out of my interest in posies and their symbolism. My fascination with the subject started when I was commissioned by the Courtauld East Wing to create a new work for an exhibition in 2009. On learning that Samuel Courtauld, the founder of the Institute, made much of his fortune making Victorian mourning gowns, I became intriqued by the imagery surrounding the Victorian fascination with death and the dead. One image that continued to appear was that of the posy. This was the starting point for a number of sketches and preparatory work that has lead to these first two prints. They are somewhat more celebratory than their Victorian inspiration however, focusing on the idea of the posy as a gift, a small sentimental act; something that is emphasised by the choice of colours within the editions, and the phrases used."