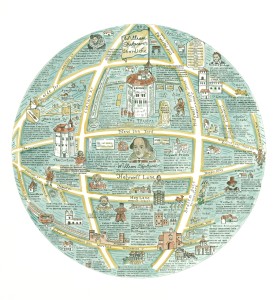 Produced to commemorate the 400th anniversary of William Shakespeare's death in 1616, artist and cartographer Adam Dant has re-populated his own neighbourhood of Shoreditch with the colourful and chaotic rabble of Jacobean players, poets and ruffians who would have caroused in these still insalubrious streets and alleyways during Shakespeare's 2nd lost years.

Shakespeare's densely populated world has at its heart 'The Theatre', the world's first purpose built, permanent playhouse and the church of St Leonard’s Shoreditch known as ‘the actor’s church’. Many of The Theatres most celebrated players, writers and clowns were buried here which, for the sake of decorum, was sited outside the city walls.

As with the memorial in St Leonard's dedicated to the celebrities of the Jacobean age, Dant's globe depicts many other significant sites worthy of pilgrimage by devotees of 'The Upstart Crow '.