In the studio with Stephen Kenny 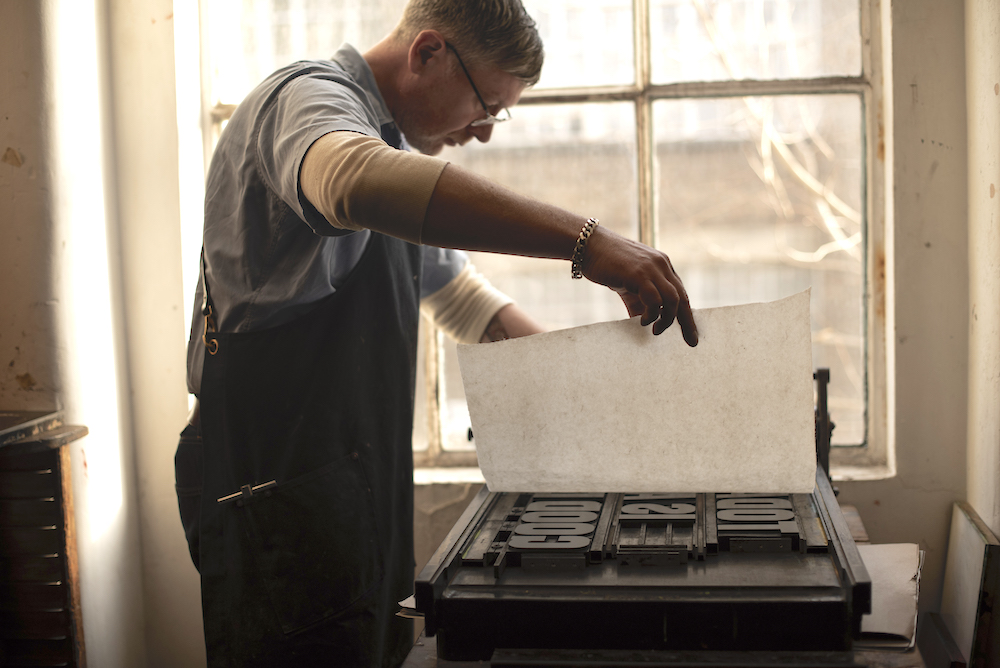 Stephen Kenny in his studio

This week In The Studio, TAG Fine Arts speaks to the master of the letterpress, Stephen Kenny!  He talks us through his printing process, his favourite Adventure Time quote, and his love for Japanese culture. You can find more of Stephen's work here!

When did you first start working with TAG Fine Arts?

In 2010 I made some prints for The Charles Lamb pub in Islington for Hobby’s wife Camille. The pub had some great art on the walls including a giant Rob Ryan paper-cut and a Charles Booth map of London in the 1880s which highlighted the gulf between the poor and rich areas of London.

How would you describe your background?

I studied Fine Art at Middlesex University and graduated in 1996, after which I worked as a freelance graphic designer for the next 10 years. I became interested in letterpress after seeing
an old magazine from 1889 with a little font on the cover in the shape of tiny logs. I found out later that the font was called Rustic and was made by Figgins & Co type foundry in 1845. I have this font now. Seeing Rustic sent me on a life long letterpress adventure, full of questions, mystery and wonder. I brought my first press and cabinet of wood-type in 2008 and have been building my collection ever since. My influences are a mixture of things; 1950s old comic books, Pop Art, Day & Collins type foundry, old circus prints, Japanese Culture, Studio Ghibli, vintage clothing, old buildings, Wong Kar Wai, my daughter. 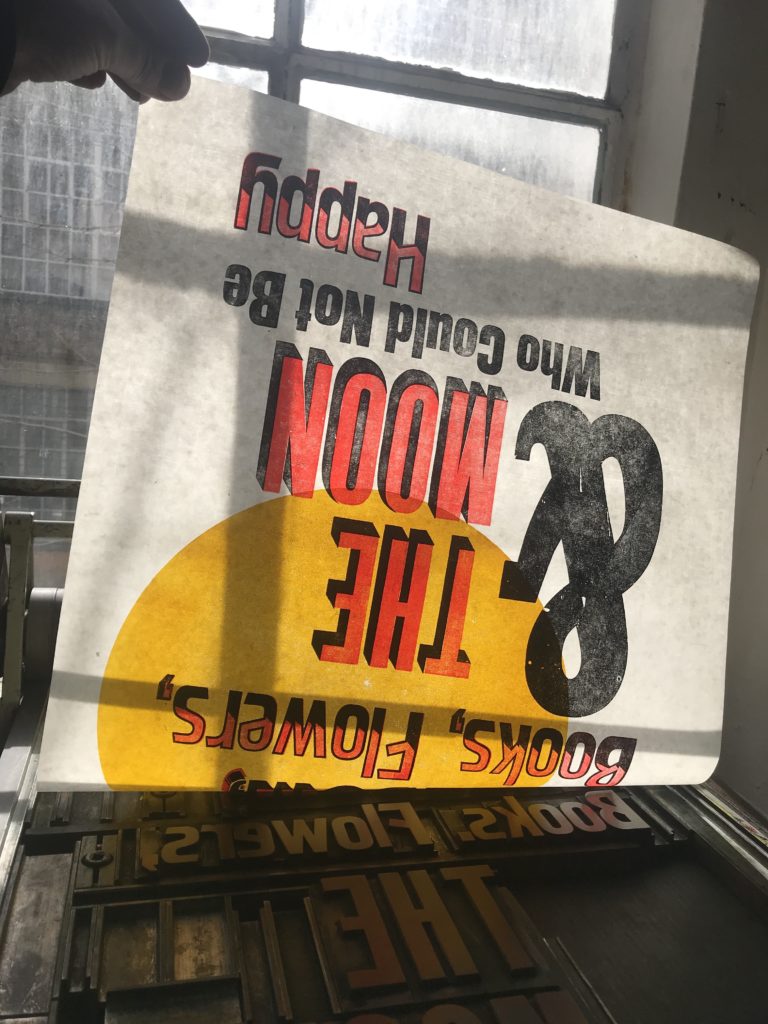 Did you ever decide to be an artist?

I knew I wanted to be an artist from the age of 9; there was always a desire and a need to create.

Define what art means to you, in 150 characters or less. 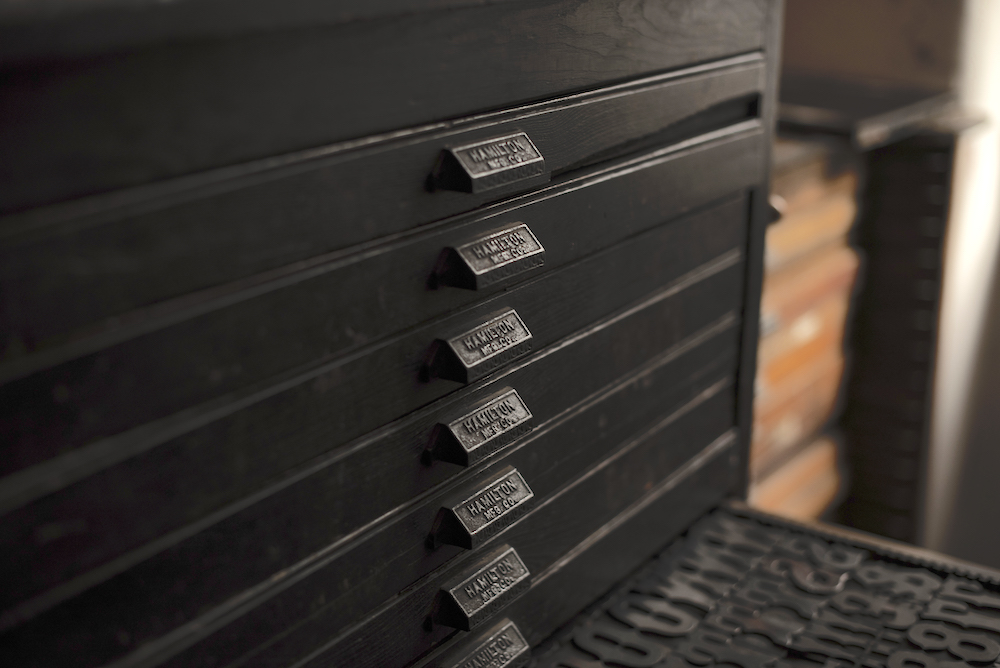 My workshop is on the first floor of the Bridget Riley Building on Dace Road in Hackney Wick. The building itself was the original Penny Black factory between 1840-1841. The workshop has the original wooden floorboards that are uneven and quite worn out in places where heavy machinery once stood. The large Farley press is right by a south-facing arched window that allows great natural light into the workshop. 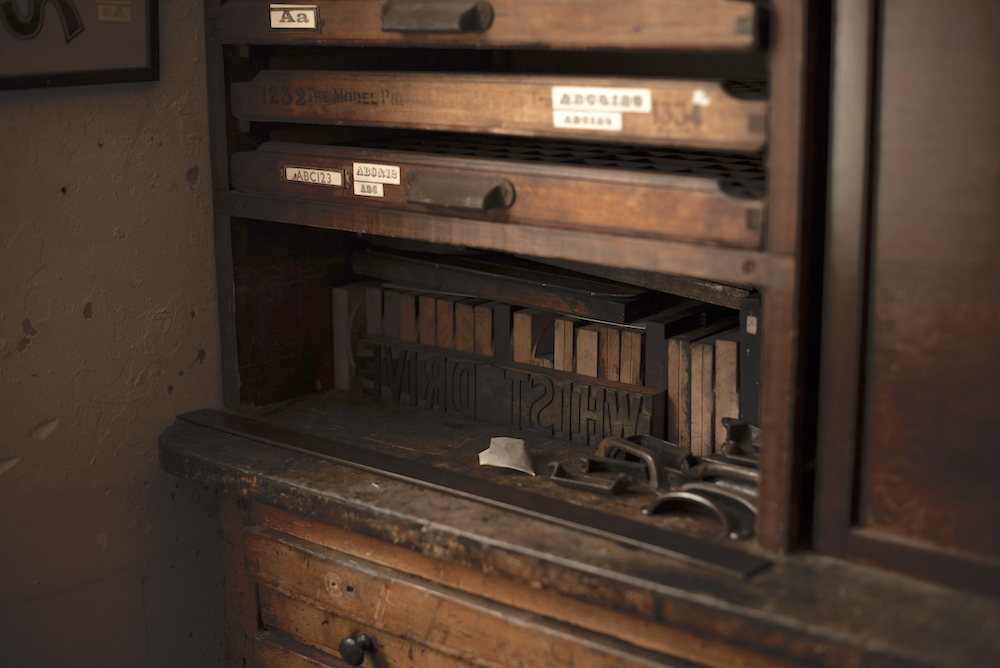 Do you have any routine you follow when you’re creating?

Proofing and designing can take hours, days or weeks, so it’s very important to get the concept and style right as early as possible. I never stop for lunch so I tend to stay focused till it’s time to tidy up.

What is your favourite work of art?

I love Ukiyo-e (Pictures of the Floating World) prints from the Edo (17th-19th Century Japan) period. To single out one work would be difficult, perhaps Hokusai’s Dragon in Rain or Utamaro’s Poem of the Pillow. These prints are very detailed sensual prints, full of colour and expression. They show a side of Japanese culture that is often hidden - even today. 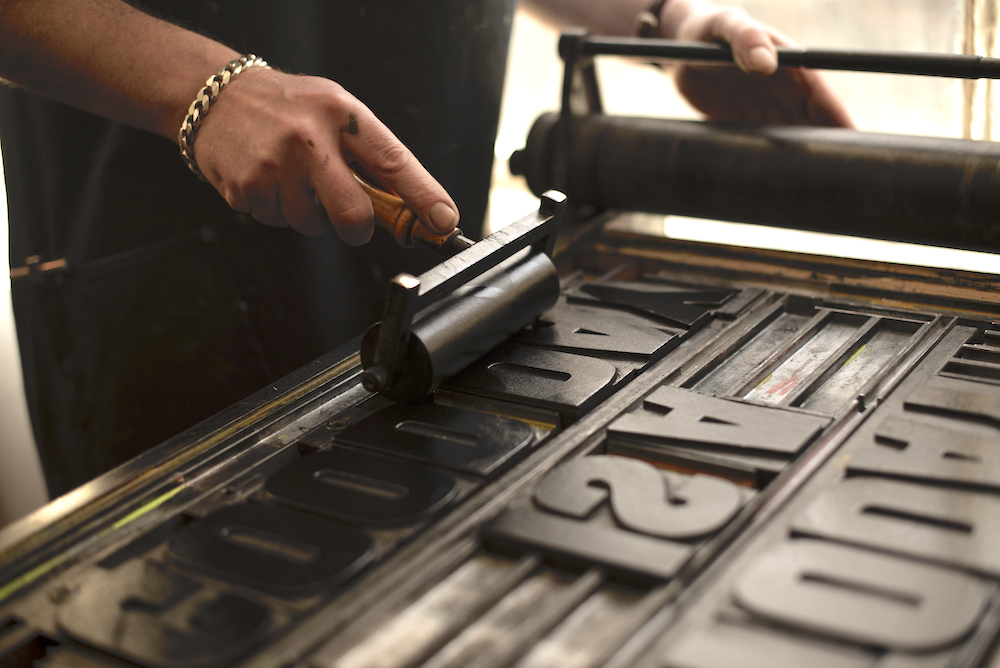 If you could have dinner with any artist, past or present, who would it be and why?

It would have been wonderful to have met some of the famous Japanese artists from the Ukiyo-e period; to share sake and gyoza with them, to talk to Hokusai about his views of Mount Fuji. I’ve been to a Takezasdo print shop in Kyoto where original Hokusai prints are still made in the original way using the same techniques that were used 1200 years ago. It looks so simple and quick, but there is so much knowledge and skill in the hands of the old master printer.

How important are current and sociohistorical events to your works?

Very. It’s important to look back to see how things were made, to witness a level of craftsmanship that we’ve forgotten or lost but it’s also important to be well informed and up to date with current thinking. A mixture of nostalgia and contemporary thinking is ideal.

Do you think social media has impacted your career?

It’s a useful tool to connect with people who think in a similar way or who are far away, like in Japan or China. It has certainly helped people to find me and made it easy to get in touch. 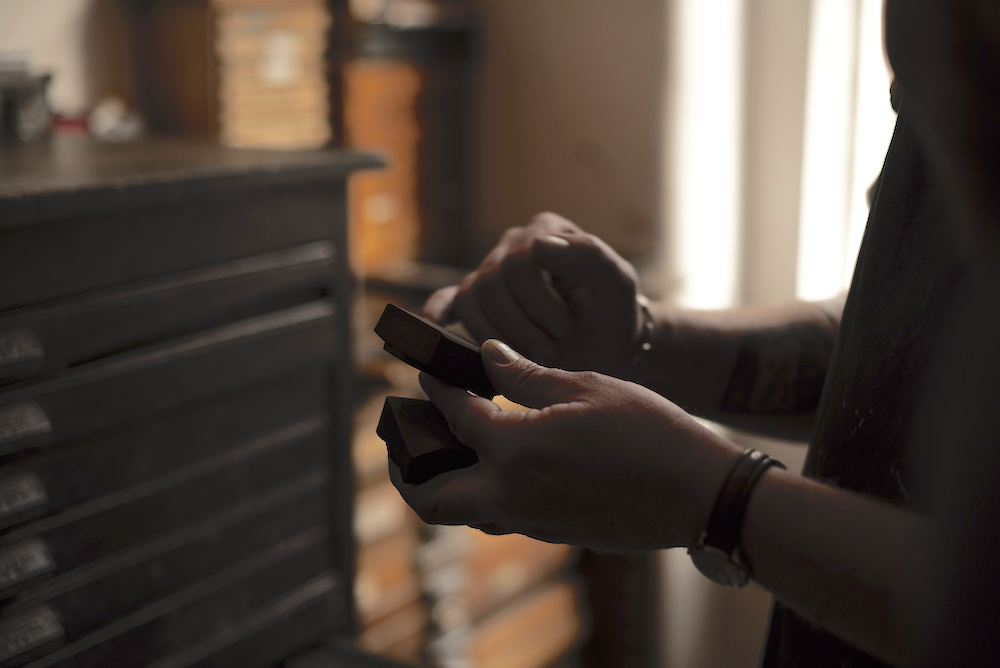 Do you create your best work independently or when within a community?

I’m happy to say; both. To have a steady workflow is important and I love the mixture of people I get to work with. I enjoy the freedom that comes with being able to work with someone like Full Count (Japanese denim brand) or Paul Smith. I love the challenge of responding to a brief or being able to come up with a concept. While I’m busy working with on collaborations or commissions I can think of my own next move and the art I’d like to make for myself or for my next exhibition. I think it’s a healthy balance and I genuinely enjoy both.

What advice would you give to upcoming artists?

Say yes until you can afford to say no. And then say no as often as possible.

Do you love what you do?

Yes, I do. Every aspect of the job is interesting. I enjoy working with old wooden blocks from the 1860s. Each block with its own character and history as evidenced in its marks and scratches. I love the variation in hand inking that makes each print slightly different. I love finding new types to work with and printing with beautiful hand made Chinese and Japanese paper. 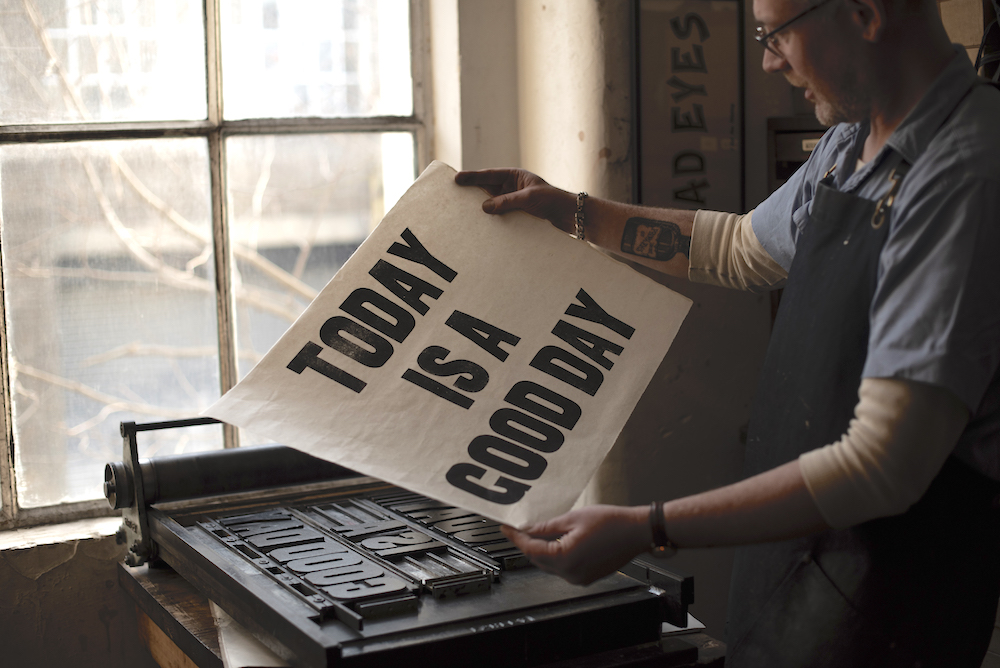 How would you describe your style?

Sometimes is a ‘classic’ style and sometimes it’s more experimental, colourful and playful. Ultimately it’s a mixture of nostalgic and contemporary.

What themes do you reflect on in your work?

I often reference popular culture in my work, for example; I recently made a print with a quote from Adventure Time, the Ice King said ‘I WOULD LIKE TO BE HAPPY BUT I’VE NO IDEA HOW’.

Do you collect art yourself?

Yes, a little. It tends to be Japanese art from Ukiyo-e. Whenever I collect contemporary art, it’s usually as a trade with fellow printers.

What inspires you to create?

So many things in my daily life find their way into my work. Creative people are always looking for inspiration, I find it in literature (Murakami), old comics from 1950s, old fabric, old magazines from 1880s.

What print of yours would you like to be remembered for?

I haven’t made it yet.

What is your quote to live by?

"If only you could answer. If only your heart had courage to lift itself up and take a chance"

What are you working on at the moment?

I’m currently working with the V&A to produce new prints for the shop to work alongside an upcoming exhibition, plus I'm collaborating with a Japanese denim designer on a series of hand made canvas and 2 new bandanas. I’m hoping to go to China at some point in 2019 to work with some new clients in Shanghai.