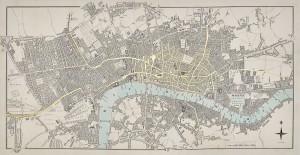 The Whittington Map is an extension of Justine Smith's 10 year series of Money Maps. For this map, Smith has stepped away from her use of paper money and reverted back to the more traditional form of currency; gold.

Smith sees similarities with the legend of Dick Whittington who came to London to seek his fortune. This folklore is actually based on Richard Whittington (1354 - 1423) who later became the Mayor of London.

By re-working an 1809 map of London by Edward Mogg, Smith has gilded the roads in the City of London with gold leaf, literally paving the streets of the banking area with gold.  The idea of people drawn to a metropolis to 'seek their fortune' is a universal one and never more prevalent than now in an age of global migration.

The Whittington Map will be on display at Spring AAF Battersea from Wednesday 8th March - Sunday 13th March. 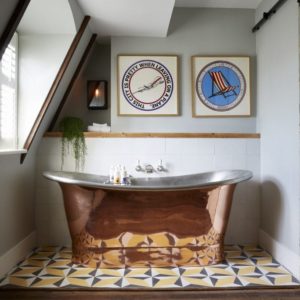 Featured in this weeks Evening Standard, The Escapist's 2022 Hotel Hotlist.