Tobias Till London A-Z at the London Art Fair 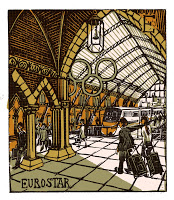 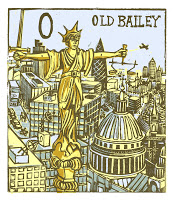 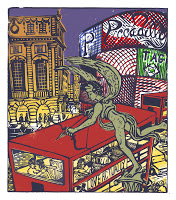 TAG Fine Arts is releasing Tobias Till's new box set of linocut prints at the London Art Fair next week. Here's an introduction to the series from the artist himself:

"I had recently completed a print depicting all the London Bridges from the Thames Barrier to Barnes Bridge, showing London in an A-Z format followed on from that. Both ideas take a structured format which set a challenge that inspired me. I enjoyed the play on the conventional London A-Z map book with the task of trying to represent London in pictorial terms with each letter depicting a different place. I started by making numerous lists with some inevitable problem letters and abundance of possibilities for others. I was also restricted to a standard proportion and there were one or two ideas that I needed to change in order to create a composition that worked within that format. I realised that some landmarks such as the London Eye did not need to be singled out as a separate subject since it inevitably appears in the background to many of the other letters. I like the idea that a landmark that is shown from different positions in a number of prints sets up a dialogue between those images and gives an overall spatial impression of the city. In making my selection I also wanted to give a range of different places. Inevitably there is a relationship between some of the subjects. O for Old Bailey and W for Wormwood Scrubs Prison clearly have a link. I also wanted to show London at a variety of different times of day and weather conditions. This led me to rework the colour of a few of the prints in order to represent a diverse range of atmospheres. To date all my lino prints have been reduction prints which inhibit much experimentation with colour. This is the first series of prints that I have produced using multiple blocks with each colour being printed from a separate block. The complete series comprises of over 100 hand carved blocks. With the aid of a computer I was able to experiment with different colour and tonal variations before committing to the final printed image." 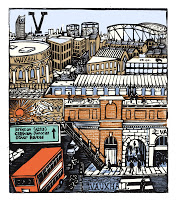 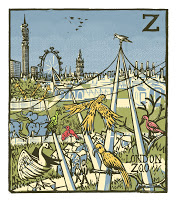 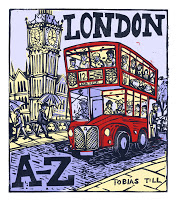